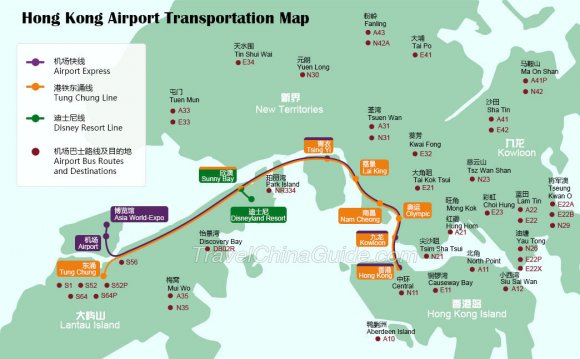 In previous years you needed to rely on the bus network for your Guangzhou Airport transport, but the airport has now been connected with the metro. The Guanagzhou metro is excellent and will deliver you to pretty much anywhere you want to go across the city.

Running on metro line 3, trains run too and from the airport between 6am - 11pm. You buy tickets for the metro from the concourse and you'll find instructions on ticket machines in English.

Given Guangzhou's crippling traffic the mtro is often a faster solution for reaching the city than taking a taxi.

Tickets can be bought for buses from the CAAC counter in the airport building. In addition to the below most hotels also share shuttle bus services to and from the airport. These are usually free but require reservation. Call your hotel for details.

Drivers on buses are unlikely to speak English so it's worth having a map on your phone that shows you where you are in the city. Google Maps is sometimes hidden behind the Great Firewall. If that's the case, try Bing or, if you have an iPhone, Apple Maps.

Taxis in Guangzhou are generally cheap and traffic jams are not as bad as in Beijing or Hong Kong. There are, however, plenty of cowboy outfits and you should avoid drivers who approach you in the arrivals hall. As a guideline it should cost around 120RMB from the airport to downtown. Use one of the counters in the lobby, or outside gates A5 or B6.

Getting to Hong Kong from Guangzhou Airport can be a little bit tricky, depending on what time you arrive. The easiest route is by direct bus from the airport. A number of companies service the route but timetables and websites online are only available in Chinese. Buses leave roughly every 45mins until around 7pm. These buses can be found in front of exit 7 on the arrivals concourse. Tickets are priced between HK$200-HK$300 one-way and can be bought from the driver.

It is also possible to take a train from Guangzhou to Hong Kong from Guangzhou East Rail Station. The station is on metro line and can reached directly from the airport. Trains run every hour and run until 7pm. The journey takes just two hours and delivers you into Hung Hom in Hong Kong.