US Consulate in Guangzhou 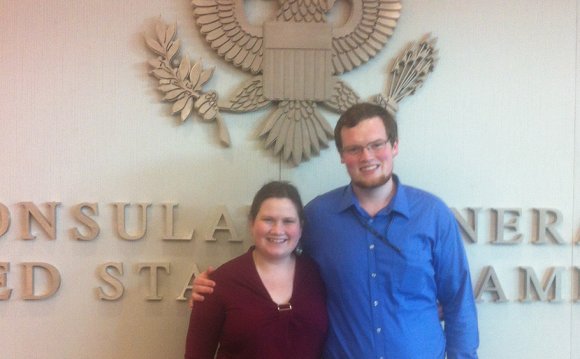 The Consulate General of United States, Guangzhou is one of five consulates general the United States set up in China. It is one of America's earliest diplomatic posts in the Far East. The consulate serves the South China region, covering the provinces of Guangdong, Guangxi, Hainan and Fujian, an area which, according to the latest census in 2010, has a population of nearly 200 million. The consulate general is also the only U.S. mission in China to process American adoptions and immigrant visas, making it one of the U.S. Department of State’s busiest consular-related posts.

The beginning of the American consulate in Guangzhou dates back over two centuries to the founding years of the American republic, even before George Washington was elected as the first President of the United States. Consulate Guangzhou (known as Canton at that time), as America’s oldest diplomatic post in China and one of America’s oldest posts in the Far East, has played a pivotal role in promoting America’s relationship with China. In 1784, the American merchant ship Empress of China reached what was then known as the port of Canton transporting ginseng to trade for Chinese black tea. The ship also carried on it Major Samuel Shaw, a 29-year-old former Revolutionary War artillery officer, who served as the business agent for this first American trade effort to the "Middle Kingdom." Shaw wrote to Secretary of Foreign Affairs John Jay, recommending that the young United States appoint a consul and vice consul to Canton. "Such officers, " he noted, "would have a degree of weight and respect which private adventurers cannot readily acquire, and which would enable them to render essential services to their countrymen." Major Shaw was appointed the first American consul to China, although he would serve "with neither salary nor perquisites but with the confidence and esteem of the United States."

At that time, Chinese authorities limited trade with the outside world to the port of Canton. All foreign traders were further restricted to living and working on factory compounds established on the banks of the Pearl River. American trade with China increased steadily throughout the early decades of the nineteenth century, although there were long periods during which the office of the U.S. Consul at Canton was unoccupied, and Americans serving at the consulate typically did not speak Chinese. In the wake of the Opium War between China and Great Britain, however, the Chinese government was compelled to expand trading opportunities beyond Canton. After the conclusion of the hostilities, the first U.S. formal mission to China, led by former Congressman Caleb Cushing, brokered the 1844 Treaty of Wanghia, an agreement which secured trading privileges for American merchants and opened new Chinese ports to American vessels. In addition to protecting the interests of United States merchants, American consuls enjoyed greater authority granted by Congress; in 1848 the Consulate was allowed to arraign U.S. citizens charged with offenses against the laws of China. The Canton consulate was burned down in 1856, but U.S. diplomats continued to support an expanding American presence in the region throughout the nineteenth century.

Aside from Guangzhou, U.S. Consulates were present in South China in the other opened ports of Fuzhou and Xiamen. However, due to a parsimonious and semi-isolationist U.S. Congress, these consulates frequently remained unoccupied. In fact, British and German officials were often asked to represent U.S. interests. This continued until the mid 1880s when the Shanghai Consul General began administering all consular services in China. At other times, the U.S. Consulate in Guangzhou also shared this responsibility.

Years of turmoil and change[edit]

With the concurrence of the British government, the U.S., in 1873, built a consulate on Shamian Island, a sandy one kilometer long strip of land around which a man-made canal had been dug ten years before to separate it from the rest of the city. Along with their European counterparts, foreign diplomatic personnel tried to recreate a Western lifestyle. They built Anglican and Catholic churches, tennis courts, an indoor swimming pool, and long promenades. Today, visitors to Shamian Island can still see the vestiges of late eighteenth century and nineteenth century Western life.

Walk on Shamian Island towards US Consulate

How To Bring your Chinese Fiancee to the USA?