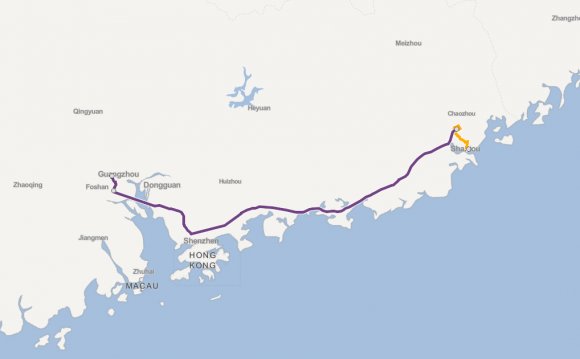 The city came to prominence during the 19th century when it was established as one of the treaty ports for trading with the West. In the 1980s it was designated as one of China's Special Economic Zones with tax breaks and other government measures to encourage development. See List of Chinese provinces and regions for more detailed explanations of "treaty port" and "special economic zone" if required.

Overseas visitors are not common in the rural areas around Shantou, and those of non-Chinese ethnicity will definitely be an attraction to residents. Those unaccustomed to this may feel intimidated. However, this is a very friendly type of attention, and unless you really dislike interaction with people you don't know, this will almost certainly be a highlight of your trip. Do not be surprised if people want their picture taken with you, or if they yell to friends and family to come look at you as well. Any sort of communication you attempt to make, especially in the local Teochew dialect, will almost always be happily received.

The airport which serves Shantou is called Jieyang Chaoshan International Airport (IATA:SWA) which in 2011 replaced Shantou Waisha Airport and hence the new airport uses the old airports IATA name, SWA, which has domestic connections with most of the major Chinese cities. It also serves international flights to Hong Kong, Bangkok on China Southern Airlines as well as to Singapore on Jetstar Asia and Taiwan.

Guangzhou Baiyun Airport offer Intercity Bus service. You can stay at Shantou Tourist General Corporation. The price of the ticket is CNY20/per.

A high-speed bullet train line connecting Xiamen to Shenzhen via Shantou is now in service. Beyond Xiamen, it continues along the coast all the way to Hangzhou and Shanghai. From the ends of that line, there are good connections almost anywhere in China.

By bus or car[edit]

Zhuhai (8 hours, ¥160), Guangzhou, Shenzhen (4-5 hours, ¥150) or Xiamen (4 hours, ¥100). There is fairly new highway that is on par with U.S or European expressways running between Shenzhen and Shantou (and beyond). However, food and gas stops are limited so make sure your gas tank is full if you opt to pass a fueling station. Note that restrooms are far below Western standards as well, particularly if you are female.

Some Hong Kong residents prefer to drive these highways in groups of 3-4 cars, as robberies sometimes take place along the road.

The Shantou Regency Hotel operates a coach service from Hong Kong. It takes 5.5 hours and costs ¥180 or HKD200. This can rise to HKD320 or ¥300 during the Lunar New Year period. Tickets can be purchased from the China Travel Service HK and one may board the bus in Sheung Wan, Yau Ma Tei or Fanling Station.

Shantou public buses can be highly variable and service frequency can depend on the whim of the operators, particularly during evening festival dates. Recorded announcements are made over the speaker system in Mandarin and Teochew, however the frequent use of the horn and general noise can make it difficult to understand.

On many services, one needs to notify the bus driver verbally if they would like to alight as the buzzers are inoperable.

Traffic in Shantou, as is common in this part of China, is chaotic at best. Do NOT expect vehicles to stop at red lights, as motorcycles and bicycles regularly go through red lights without slowing down. Also, do NOT expect vehicles to go with traffic, as cars, motorcycles, and bicycles regularly go AGAINST the flow of traffic (e.g. going southbound in a northbound lane). Furthermore, do NOT expect only pedestrians on sidewalks, as cars, motorcycles, and bicycles regularly zip along the sidewalk as if it is just another lane on the road. Also, watch out for motorcyclists who do not slow down at red lights, with one hand on the steering wheel and the other with a cell phone, talking. However, with all this, there are fewer accidents that one may expect given this chaos, mainly because people do slow down if they see you.