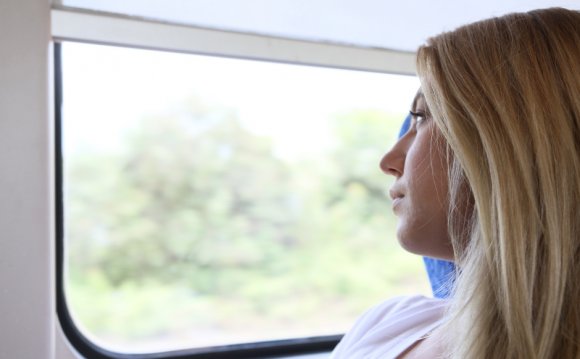 One of the best things you can do when you travel is to follow your instincts. When we arrived at our hotel in Guangzhou, I immediately got the heebie jeebies.

When we booked it we misunderstood where the hotel was and thought it was right near the main train station we arrived into from Hong Kong. Turns out it was right over the other side of town near another similarly named train station and far away from the main areas of Guangzhou.

Where we ended up was completely different to what I thought China would be. It was very industrial and really hard to find anything to see, eat or do around the area. There were hundreds upon hundreds of small shops packed with clothes from factories, packing them up and distributing them.

Our hotel was pretty awful. The front desk staff were really rude and the place absolutely reeked of cigarette smoke, it made our eyes sting. The hotel doubles as office space, so some of the rooms are converted into offices for the local clothing stores meaning people are coming and going at all hours, talking on phones, smoking in hallways and there’s no security.

Late at night people were in the hallway packaging up clothes to send while smoking and talking.

The view out our window was bleak and grey, just building after building covered in smog. The room was really rundown and crappy and with nowhere to eat in the local area we were eating bags of chips and pot noodles. We both felt really uneasy and didn’t want to go out much.

I’ve stayed in some really creepy and really rundown places before, so all of this stuff would have been fine if it weren’t for both our intuition telling us to move. Both Matt and I felt really uncomfortable and this all culminated on the second night.

Walking through the hotel lobby a local man saw me, starred, then yelled out to me and walked around Matt and offered me money for sex. Nobody in the hotel lobby even flinched, not the front desk staff, not the other guests, nobody. It scared me to realise we were all alone in that situation and nobody else gave a crap that it was disgusting and inappropriate.

Later that night, after I went to sleep, Matt said he started to feel weird. He said he felt like there was tension building in the air and it grew and grew until a man started bashing on our door at 1am.

When I woke up the next morning, Matt didn’t sleep a wink, we booked another hotel and moved immediately. As soon as we arrived at the new hotel everything changed. We were both able to relax and felt all the tension and weirdness leave our minds and bodies. It also meant we could enjoy Guangzhou properly.

When you’re travelling and you feel those heebie jeebies, listen to them. Your inner voice and your intuition are guiding you and telling you to get out of there. Always listen to them. Don’t question whether you’re being a brat or spoiled, don’t worry if the money is worth it or if it’s too expensive, just follow your intuition.

I really want to be clear and tell you that our experience is not a reflection on what Guangzhou is like or what the people are like. You shouldn’t be deterred from visiting the city based on what I’ve written as it was just 2 days of our time here and a few people who made us feel weird. That could happen in any city, including our home town. After we moved, it drastically changed.

We moved to a really great hotel near Beijing Road, one of the main areas of Guangzhou. It was great to be able to walk around the streets and meet people and really get into Guangzhou life. There were loads of shops to explore and we even managed to scoop up some Converse shoes for AU a pair! If that isn’t the bargain of the century, I don’t know what is.

It was still a bit tricky to find local food as most of the great smells came from street food vendors and the restaurants we saw were all Thai, Vietnamese and Hong Kong food. I’d done some research online and read that it can be okay to eat the street food here, but didn’t trust my weak Australian stomach to handle it. So we ate a lot of Hong Kong food and even made a trip to the local Pizza Hut, which was incredibly good.

I try my best to eat as much local food as I can when I travel, knowing that I’ll be back into my regular food when I get home. But sometimes, when you’re travelling, there’s nothing better than a little taste of home. For us, last night, that was a vegetarian deep-pan pizza. So good.

I’m in the airport at the moment, waiting for our plane to Beijing as I write this. I’m hoping we’ll be able to get our hands on some really great Chinese food when we get there and I’ve got quite a few yummy restaurants tee’d up. By the time you guys read this on Monday I’ll probably be in a dumpling food coma somewhere.

Temple of the Six Banyan Trees

You’ll be pleased to know, aside from the first 2 days here, I’ve been blissed out and still going with the flow and enjoying every moment. Seeing two vastly different sides of a city is actually really cool, it makes you appreciate the enjoyable parts a great deal more and feel really appreciate of it.

I was a little unsure how I’d communicate to people at restaurants that I’m vegetarian or ask for soy milk in my coffee, but we’ve found it really easy to get around it. I googled the english to mandarin translation of these and some other key phases and screen-shotted them, saving them in my phone.

Most restaurants have menus with photos, so we’ve been able to point at what we want and then show the screen-shots of phrases like ‘no meat please’ or ‘soy milk please’. It works like a treat!

The locals have been really understanding that we don’t speak the local language and really helpful in taking care of us. We’ve been brushing up on some basic local phrases and it goes a long way when you take the time and make the effort. Also, it’s kind of fun to learn something new (yea, I know, I’m a words nerd.)

Moving onto Beijing today is really exciting, I’ve dreamed of visiting this city for a long time as I’ve always been fascinated by their history. I’m expecting it to be really humbling and overwhelming seeing all the incredible historical sites I read about so long ago. I’ll also share some of my favourite photos from Guangzhou later this week, so stay tuned.

Travel Vlog to Hong Kong & Guangzhou China! - Things to Do ...