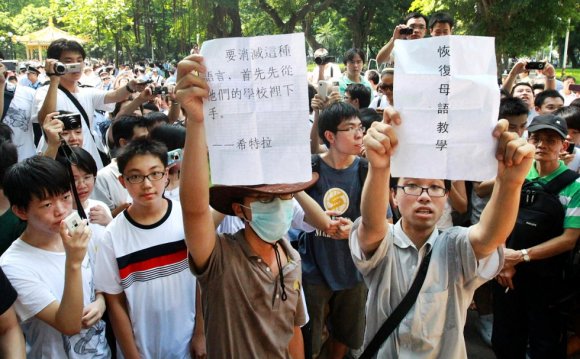 AFP Photo/Johannes EiseleThough people in Hong Kong speak Cantonese, it is becoming increasingly marginalized.Free-wheeling and business-oriented, the southern Chinese city of Guangzhou is a long way from Beijing physically, culturally and linguistically - and hackles have been raised by reports Communist authorities are demanding local television drop Cantonese in favour of Mandarin.

Throughout China, Mandarin - known as Putonghua, the "common language", with its roots in Beijing's northern dialect - is the medium of government, education and national official media.

The ruling Communist Party has long viewed it as a means of weakening regional loyalties and forging a sense of common identity, particularly in far-flung areas such as Xinjiang and Tibet which see fits of resistance to Beijing's rule.

But according to a ministry of education statement last year, 30 percent of Chinese - 400 million people - still cannot speak Mandarin.

Cantonese is the first language of roughly half the population of Guangzhou, China's third-largest city and the provincial capital of Guangdong - where for many elderly residents, it is their only tongue.

Nonetheless reports in neighboring Hong Kong said the province's official broadcaster Guangdong TV was planning to quietly switch most of its programming from Cantonese to Mandarin on September 1.

In mainland China the two languages generally use the same characters for the same words, so that they are mutually intelligible in written form - but incomprehensible when spoken.

"I oppose them changing it all to Mandarin, " said Huang Yankun, a 17-year-old student, walking past the television station's headquarters. "It's wrong for them to try to restrict the language in this way.

"Speaking Cantonese is a Guangdong custom; it's a tradition that we need to support."

Cantonese is spoken by more than 60 million people in China, according to the state-run China Daily - on a par with Italian in terms of native speaker numbers.

But some in Guangzhou worry that as young people and their parents focus on Mandarin for academic and career reasons, Cantonese may fall by the wayside.

"A lot of kids, they speak only Mandarin at school, " said Huang Xiaoyu, a 28-year-old media worker. "And at home, their mum will speak to them in Cantonese but the kids will respond in Mandarin.

"Very, very few little kids these days speak Cantonese. How are old people going to communicate with their grandchildren if they don't use Cantonese?" she added.

Four years ago a similar proposal by Guangzhou TV sparked fury and hundreds of protesters defied the authorities to take to the streets, with similar demonstrations in Hong Kong, which also speaks Cantonese. The plan was dropped.

A spokesperson for Guangdong TV said they were unaware of any coming change.

But Victor Mair, professor of Chinese language and literature at the University of Pennsylvania, said national authorities had been promoting Putonghua for around 100 years.

"Its primary aim, then as now, has been to attempt to unify the country's language, but it has an underlying secondary agenda, which is the domination of the south - Cantonese, Shanghainese, Hokkien, etc. - by the north, Mandarin, " he said.

"It's the same in China as it is in other parts of the world: Quebec, Belgium, Ireland. Language matters."

Cantonese had been "tremendously weakened" in Guangdong since the People's Republic was established in 1949, he added. "If it weren't for Hong Kong, Cantonese would soon cease to exist as a significant linguistic force."

'I don't understand a word'

As China's richest province, Guangdong draws migrants from all over the country, and some of them would back the television switch.

A 58-year-old woman surnamed Yang from Shandong province in the northeast, said: "I don't understand a word of Cantonese. It's very annoying! Everyone can understand Mandarin, it's widespread."

Zhang Yiyi, 72, a professor of French from Nanjing, three provinces away in eastern China, has lived in Guangzhou since 1988.

Cantonese has a greater range of tones than Mandarin, as well as a choppier sound to an untutored Western ear.

But Cantonese activist and editor Lao Zhenyu said the language was "rich in sounds, and sonorous".

"Relative to Mandarin, the history of Cantonese is more profound, it has nearly 1, 000 years of history, and Mandarin only has around 100. When we read ancient poems in Cantonese, we find they still rhyme. Cantonese has a more abundant vocabulary than Mandarin, and its expression is more vivid."