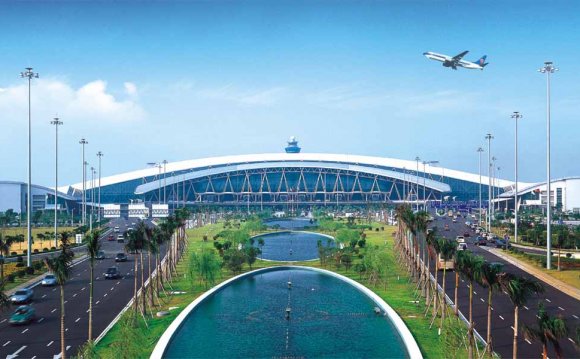 It is the largest airport in the southern part of the country, and serves as the operational base for China Southern Airlines. The airport is currently the second busiest in China based on passenger flow, and the third largest based on cargo movement.

The new Guangzhou Baiyun International Airport in Huadu District, with a total investment of Y19.8bn, was formally put into operation on 5 August 2004.

Covering an area of 15 km², the airport is the first in China that was designed and built on the hub concept.

The new airport will be capable of handling more than 80 million passengers and 2.5 million tons of cargo annually by 2010. This makes it a potential competitor for the new Hong Kong airport as a hub for southern China. Guangzhou Baiyun International Airport Co Ltd is the operating company.

Transport volume in China is growing quickly as the economy continues to expand, but air travel is growing at a faster rate than transport as a whole. To facilitate this, the ninth five-year plan envisages a boom in airport capacity as 41 airports in China are built or upgraded.

Baiyun airport is also at the centre of a number of construction projects, which are driving the local economy of Guangzhou and the surrounding region. The new airport is important to the city as it will help to make the area an even more attractive site for foreign investment.

The new airport is 28km (17.4 miles) from downtown Guangzhou and nearly five times larger than its predecessor with 66 aprons and two concrete paved runways 02L/20R (3, 600m) and 02R/20L (3, 800m). The ambitious second phase of construction, aimed for completion in 2009, aims to double the capacity yet again. A branch of the Guangzhou Metro to the airport is also under construction.

The schedule for this ambitious project began in early 2000 and the first phase is expected to end in 2002 when the new airport is up and running. The total project, however, may not be completed until 2010.

The project has three phases. The first encompasses design of a 3, 500, 000ft² central passenger terminal complex, two runways and associated roadways and parking facilities. The second phase includes designs for an additional runway and expansion of the terminal, and the third phase will include another central ticketing terminal and 50 additional gates.

"Guangzhou Baiyun International Airport is the first airport in China to be designed and built on the hub concept."

The project is also likely to involve a railway to and from the city. The terminal was designed to accommodate a projected passenger turnover of 27 million in 2005. Covering an area of 320, 000 m², the first phase of the terminal complex is the biggest of its kind in China and all its equipment and facilities are fully compliant with international standards.

The airport has set up business relations with 33 airlines and opened more than 110 air routes to over 100 cities in China and abroad thanks to its compatability with nearly 30 types of aircraft.

China Southern Airlines and Shenzhen Airlines are two home carriers of the airport.

The planning will allow the airport to expand from 46 contact gates in phase one to over 130 contact gates at the end of the project. The construction of the new airport has demanded the relocation of 20, 000 people to make way for the new buildings.