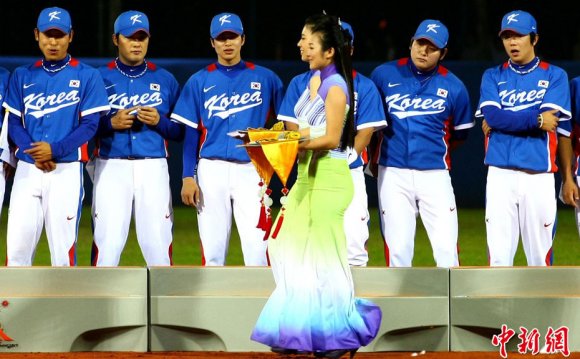 The official emblem was inspired by traditional Xiguan coloured glass windows used in Guangzhou since the 17th century and is an important part of Lingnan architecture. The gaps between the coloured glass displays a silhouette of an athlete in motion. The overall design represents both the hospitality of the people of Guangzhou and the ability of the Asian Para Games to break down barriers between abled and disabled people.

The official mascot for the 1st Asian Para Games is Fun Fun (芬芬), an anthropomorphic kapok, a flower which is native to Guangzhou. The mascot represents strength, joy and vitality of the athletes and the Asian Para movement.

The opening ceremony was held at 8:00pm on 12 December in the Guangdong Olympic Stadium. The ceremony was supervised by director-in-chief Zhu Jianwei and included more than 4600 performers, among whom 300 had a disability. The high-tech artistic performance dubbed "A Beautiful World" was divided into three main sections: "Aspirations", "Pursuing the Dream" and "Flying", which highlighted the themes of family, society and persons with a disability. The spiral-shaped cauldron was lit by Zhang Lixin and Zhang Haiyuan both of whom have one leg.

nineteen sports are on the program:

The closing ceremony was held at 8:00pm on 19 December in the Guangdong Olympic Stadium featuring Chinese cultural performances and fireworks. The 40-minute artistic performance was entitled "You Make the World Different" comprising three chapters, namely "Sky and Sea" (blue), "Leaf and Vein" (green), and "Light and Dream" (red), and was themed on the concepts of reunion and departure. It featured songs by local artists Cao Fujia, Huang Zheng, Xu Yang and Shi Peng and a performance by hundreds of children.

Among the highlights was as the cauldron flame was extinguished, the torch which ignited the cauldron during the opening ceremony was relit and passed down the man-made cliff below the cauldron by several disabled athletes forming the Chinese character for people "ren" (人). The flame was then carried in a rectangular lantern and handed over to Wan Qingliang, the mayor of Guangzhou. As the first Asian Para Games, the flame will be kept in Guangzhou forever. The torch and flag of the Guangzhou Asian Para games as well as the flag of the Asian Paralympic Committee were passed from Wan Qingling to Dato' Zainal Abu Zarin who passed it on to the President of South Korea Paralympic Committee for the 2014 Games. All future games closing ceremonies will involve delegations passing the torch and flag of the Guangzhou Games.

The closing ceremony was attended by President of Asian Paralympic Committee Dato' Zainal Abu Zarin and State Councilor of the People's Republic of China Liu Yandong. In their speeches, the officials and organisers congratulated the athletes and thanked them for contributing to the success of the games. Wang Xinxian, President of Chinese Paralympic Committee, said, "We can say proudly that the Guangzhou 2010 Asian Para Games were a complete success under the theme, "We Cheer, We Share, We Win". We are confident that the Asian Para Games flame with the value of humanitarianism will forever light the way of human progress and a better tomorrow." Dato' Zainal Abu Zarin described the games as "the best Games for [disabled] athletes ever staged in Asia so far". The ceremony was watched by a 60, 000 capacity-stadium crowd. The games were officially closed by Abu Zarin.

Thirty-two existing stadiums and gyms have been updated by organizers in addition to building eleven new ones, at a total cost estimate of 6 billion Yuan. The athletes' village estimated cost is around 2 billion Yuan.