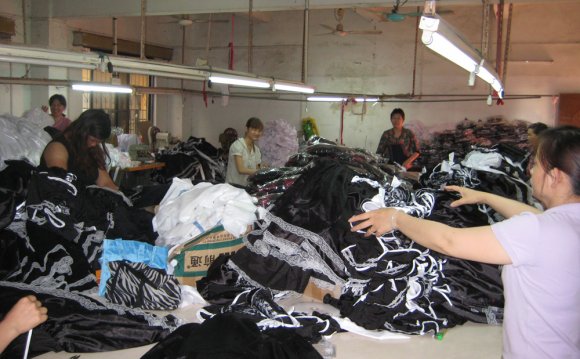 Chinese manufacturers and traders looking to make greater profit are now taking their wares straight to Africa and some Africans in China are rapidly turning away from buying and selling the small batches of cheap, low-margin products like clothes and plastic household goods that have made up much of their business. Instead, traders have begun manufacturing and shipping everything from heavy machinery to toothpicks for African companies.

Ghanaian merchant Ben Owusu-Achiaw said many of the African companies he works with have moved away from simple import-export operations because of competition from Chinese merchants. “Go to Makola Market, ” he said, referring to the biggest trading center in Accra. “Chinese traders have all the best stores.” His concerns are echoed in Ghana, where politicians have been pushing for the World Trade Organization to stop Chinese merchants importing and selling Chinese-made versions of products also manufactured in west Africa.

Owusu-Achiaw moved to China 10 years ago, and started exporting clothes. Because he picked up the language quickly, he often found himself acting as a middleman between Chinese manufacturers and African traders. He started off with a few thousand dollars, and now handles 0, 000 and 0, 000 of orders at a time.

Established African merchants in Guangzhou like Owusu-Achiaw are increasingly focusing on logistics, and finding Chinese manufacturers for Ghanaian companies. “People come to me and say ‘I want 10, 000’ of this, and bring a sample, ” he said. He travels the country finding the best factory for the job, a challenge, he said, because there’s no such thing as a deal: you basically get what you pay for.

This shift has meant that instead of just trading with Chinese businesses, African merchants are partnering with them to run factories, warehouses and export operations.

There are closer cultural ties too, with a growing number of intermarriages, and groups dedicated to keeping the peace between the African communities and their Chinese hosts.

Traders discuss a shipment of jeans at Canaan Market in Guangzhou, China.(Yepoka Yeebo)Members of the Sacred Heart Cathedral congregation donate groceries in Guangzhou. There are a growing number of interracial families in the city, according to Elochukwu Chikwendu, who was one of the first Nigerian traders to marry into a Chinese family.”We’re working to keep families together despite the cultural differences, ” he said.(Yepoka Yeebo)Zurick Onyeka runs a branch of his family shipping business in Guangzhou, sending shipments of everything from car parts to clothes to Nigeria.(Yepoka Yeebo)Traders often focus on cheap, low-margin clothes that sell quickly.

Most run both wholesale and retail operations, especially in countries like Nigeria, which has a large number of consumers, and is also a magnet for traders from all over west and central Africa.(Yepoka Yeebo)A trader carries a shipment of jeans through a mall in Guangzhou. Many traders stay in Guangzhou after their visas expire, hoping to remain undetected until they make enough money to go home. Some are caught in regular police stings, and others give up, relying on the charity of African-community organizations for airfare home.(Yepoka Yeebo)Shipping companies near an export market in Guangzhou. Despite the low margins involved, the city’s smaller logistics companies often send cargo by air because smaller traders need to sell quickly to recoup their investments. “Even if they make just 1 renminbi, it’s worth it, ” says Kelvin Walters who runs a Nigerian-Chinese shipping company that handles an average of 70, 000 pounds of cargo a month.(Yepoka Yeebo)Many of Guangzhou’s African businesses are partnerships with locals, which, traders say, makes it easier to set up and run companies in a part of the country where most small manufacturers speak no English and most small traders speak no Cantonese.(Yepoka Yeebo)