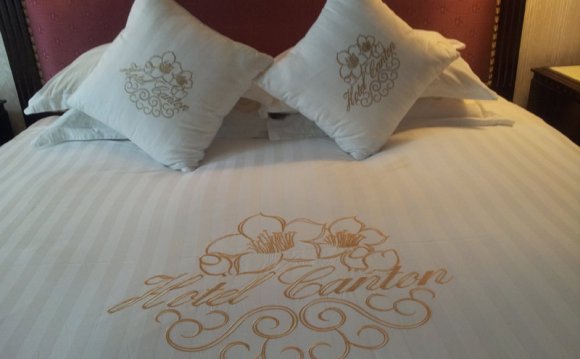 You may skip the exhibition halls for the dull and dazzling statastics and pictures, go directly to the upper floor under the main exhibition buildling and go to see the burial site of the Nanyue King. Buried 20 meters underground, the tomb is composed of over 700 huge stones and slabs carved with colorful murals. A huge number of ancient artifacts, bronzeware and terra cotta ware were discovered. The King was in the jade shroud with typical jade burial rite. In addition, 15 human sacrifices found in the tomb reflects the unique burial customs.

Then walk along the sideway of Jiafang North Road (解放北路) to the south direction for about 15 minutes, then right at the road of Bailing Road (百灵路). Again turn left at the first T-junction and walk for about 5 minutes along Liurong Road (六榕路), you will see the entrancee to Temple of the Six Banyan Trees ( Liurong Temple ). The temple is well known for its lotus flower pagoda, the main structure of the temple built in 1097.

The entrance to Temple of the Six Banyan Trees with the two words “Six Banyan” above the gate.

The Lotus Pagoda inside the Temple

The entrance to Guangxiao Temple

The Guangxiao Temple is the largest monastery in Guangdong Province with the longest history and greatest influence. It was originally the former palace of Prince Zhao Jiande, the grandson of King Zhao Tuo, the first king of Nanyue Kingdom in the Western Han Dynasty. The monastery has an important position in Buddhist history as Huineng of the Zen Buddhist sect was a monk here in the 7th century.

The grand Hall of Mahavira

At the end of your glimpse of Guangxiao Temple, you exit and walk to the south along Guangxiao Road ( 光孝路). Then come across Zhongshan Road (中山路), one of the main avenues in Guangzhou and take subway line 1 from the station of Ximenkou (西门口) to the west direction and get off at the next station of Chenjiaci ( 陈家祠) and use the Exit C.

The magnificent entrance or exterior of Chen Clan Ancestral Hall

The Chen Clan Ancestral Hall was originally built by the 72 Chen clans for the accommodation and preparation for the imperial examinations from Chen families in 1894 in Qing Dynasty. Later it was turned to be the Chen Clan’s Industry College, and later middle schools afterward. Now it is home to the Guangdong Folk Art. The Chen clan ancestral hall is famous for the ornate decoration which is presented inside and outside the halls. A large collection of wood carving, stone carving, brick carving, pottery, plaster and iron engraving are seen on the walls, beams, columns, ridges and soon, a trove of Chinese folk arts.

After your exploring the Chen Clan Ancestral Hall, walk back to the subway line 1 and take the subway to the west and south direction and get off at the next stationof Changshou Road (长寿), and use exit B and walk to the north along Baohua Road (宝华), then turn left and walk along Baoyuan Road (宝源路) to the west direction. In 20 minutes, you will come across the north-south Longjin West Road (龙津西路). You turn right and walk to the north along Longji West Road and soon you will come across Longjin Birdge (龙津桥). You stroll along the banks of Lizzhiwan River and start your Xiguan Old Houses tour.

Xiguan is a traditional geographical division of Guangzhou. It is situated in Liwan District, on the west of Guangzhou. Longjin Road (龙津路) is the center of old Guangzhou culture. The big and old buildinsg were built in the past 100 years. people still live in their old hous. These houese are are combination of eastern & western architecture The houses all have the traditional Lingnan characteristics blended with western styles.

The old houses lie on the banks of Lizhiwan River.

The big and old houses were originally built in Qing Dynasty and the Republican Era of China with a history of over 100 years.

At the end of your glimpse of Xiguan Old Houses, you take a taxi or walk to the most well known pedestrian streets Dishifu and Shangxiajiu streets which are flanked by the unique and historical architecture, blending the characteristics of European and Chinese styles. It has a group of old famous stores, some well-known restaurants.

At the eastern tip of Shangxiajiu Pedestrian Street, you turn right and walk on the south direction along Renmin South Road, and soon you will get to Shamian Island.