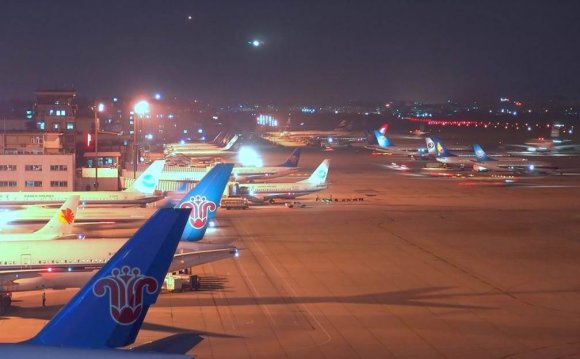 Just arrived at Guangzhou Airport. When I got off the plane and into the building, it feels damp and smells musky like an unused hotel room. Walking to customs, I noticed that the ventilation was not even on. This accounts for the damp and musky feeling. Waiting in line for customs, they separated us into Chinese and foreign citizens. Obviously, there were less Chinese citizens coming in. Despite that they still have equal numbers of lines for the two groups. We foreigners ended up waiting a long time while the Chinese citizens were already through customs. On the other hand, going through customs was relatively painless. After customs, I waited for my luggage and no one showed up. I waited and waited and still no luggages. I finally asked a stewardess. I was told that my luggage was already scanned electronically and I can pick up my luggage at my final domestic destination. I wished China Southern had told me about this when I checked in at the counter. What a waste of my time. After that I went to the domestic transfer point. What do I find, a very long line waiting to go through security again. It was chaotic. No one was directing the passengers who had just deplaned. As a result, people who were going to be late were forced to jump the line which caused upset to other passengers who obeyed the rules. Security have to check passports, boarding passes and rescan people as well as the luggage again. Problem is that you have at least 100-150 people who are waiting with only three security lines doing the checking. There was no air ventilation. For such a rich country and such a big airport, couldn't they afford to turn on the A/C so people can feel more comfortable? (I was soaked and sticky from my own sweat after reaching the Gate where they did actually turn on the A/C). All 3 lines, the metal detectors do not seem to work because everyone who went through them had to be checked again by the security personnel waving a metal detector wand. What a joke. Plastic containers for the computers were also in short supply. I noticed that the security girl had to wait for the container to come back before she can proceed with another customer. Once I got through the security check, I boarded a small tram from A to B terminal. It was a long bumpy ride. It is not a short walk. My recommendation is to avoid this airport at all costs. It is an embarrassment to China.