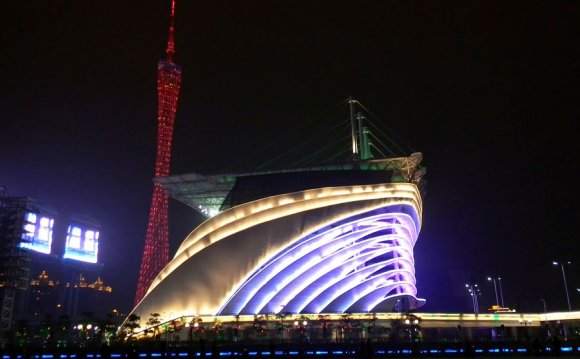 Guangzhou Baiyun Airport is 6 kilometers (about 4 miles) from Guangzhou urban area. In China, the passenger throughput of Baiyun Airport is only ranked after Beijing Capital Airport. Besides airlines to every part of China, there are 16 international air lines linking Guangzhou with Los Angeles in the USA, Amsterdam in Holland, Sydney and Melbourne in Australia, Osaka and Tokyo in Japan Paris in France, Seoul in South Korea, Lagos in Nigeria and South and Southeast Asian countries (including Vietnam, Laos, Burma, India, Singapore, Malaysia and Indonesia).

It takes about 30 minutes taking a taxi from downtown to the airport, and the fare is about 20 yuan. A shuttle bus is also available, costing 3 yuan per person, and the shuttle bus sets out when the bus is full. Check the timetable of the airport shuttle buses or .

There is a developed highway system in Guangzhou. Guang-Fo(Guangzhou-Foshan) Highway and Guang-Hua Highway were put into use in succession. Now, there are about 20 big long-distance bus stations in Guangzhou including the major ones of the Provincial Bus Station, Fangcun Bus Station, Guangzhou Passenger Transport Center, Tianhe Bus Station and Yuexiu South Bus Station, offering plenty of coaches to different cities and counties in and out of Guangdong Province.

Guangzhou is located beside the Pearl River, and it is one of the most famous port cities in China. The Pearl River is the second largest navigable canal in China, only ranked after the Yangtze River. Passengers can take ship to Hong Kong, Macau and Haikou.

For passengers' convenience, Guangzhou also equipped with night buses (Night 1–Nigh 41), most of which are available till 01:50 in the night and some of them even run overnight. Ticket fare (for the distance under 21.5 kilometers or about 13 miles) is 1.5 yuan per person for common buses and 3 yuan per person for air-conditioned buses, and that for the distance above 21.5 kilometer is 2.5 yuan and 4 yuan orderly.

At present, Guangzhou has about 16, 000 taxies but demand is also huge particularly during peak hours from 8 am to 9 am and at lunch and dinner. Taking a taxi follow the principles of "marked prices": The flag down fare is 7 yuan for the first 2.3 kilometers, and it is 2.6 every additional kilometer after that.

Guangzhou's subway network covers much of the city center. The ticket ranges from 2 Yuan to 12 Yuan. Currently, Lines 1 and 2 are the most useful to tourists, because these two lines run east-west and north-south respectively across the city center.