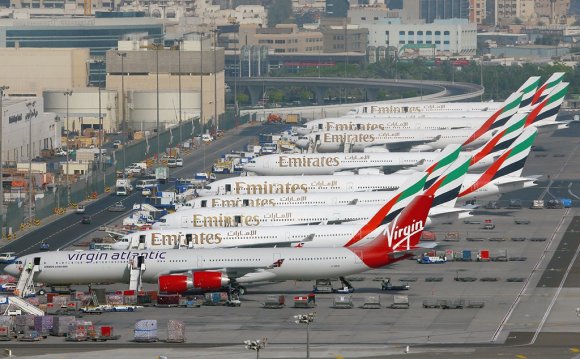 In January 2010, Subic Bay Metropolitan Authority Administrator and CEO Armand C. Arreza expressed interest in closing Subic Bay International Airport in favor of converting the area to a logistics hub. This was due to the closure of FedEx's delivery hub, which is located within the airport complex, and the planned expansion of the nearby Clark International Airport.

In December 2010, Guam-based Aviation Concepts has set up fixed-based operations as a full-service business jet center at Subic Bay International Airport, which has made it Asia’s largest private aviation firm in terms of hangar space (100, 000 square feet).

In 1950, Admiral Arthur W. Radford, Commander-in-Chief of the United States Pacific Fleet, envisioned an army base in the Western Pacific to enhance Seventh Fleet capabilities. In 1951, construction started on the Subic Bay Naval Base. In 1952, Admiral Radford made his first landing at Cubi Point. After decades of use by American forces, Mount Pinatubo exploded in 1991, burying Cubi Point in 18-36 inches of ash. Despite this, the American government wished to keep the Subic Naval Base and signed a treaty with the Philippine government. The treaty was not ratified, however, failing by a slim margin in the Philippine Senate. Attempts to negotiate a new treaty were soon abandoned and the United States was informed that it was to withdraw within one year. U.S. forces withdrew in November 1992, turning over the facility with its airport to the Philippine government. Initially some 8, 000 volunteers guarded the facility and prevented looters from damaging the facilities. The Subic Bay Metropolitan Authority (SBMA) was created by intense lobby of then-Mayor Richard Gordon to manage the facility under Republic Act No. 7227. He was appointed first Chairman and Administrator.

Twenty days after the departure of American forces, the airport ushered in its first commercial flight from Taiwan via Makung. In February 1993, NAS Cubi Point was converted to Cubi Point International Airport, a few months later, it was renamed Subic Bay International Airport. To herald its designation as an international airport, President Fidel V. Ramos chose to arrive from an official visit to the United States using the airport. This flight also proved the capabilities of the airport as the President arrived aboard the delivery flight of Philippine Airlines's first Boeing 747-400. Construction of the present runway commenced in 1993 Hanjin Heavy Industries Construction and was completed in April 1995 in time for the inaugural landing of FedEx Express MD-11 and the opening of FedEx's AsiaOne hub at SBIA. The hub lasted until 2009, when FedEx moved all operations to Guangzhou Baiyun International Airport in Guangzhou, China. In time for the 4th APEC Leaders' Summit, the new passenger terminal built by Summa Kumagai was inaugurated on November 4, 1996. In 1997, SBIA topped the 100, 000th passenger count.

As of 2016, there is very limited regularly scheduled commercial flights from Subic Bay, with the airport only utilized for pilot training activities.

Subic Bay International Airport boasts of modern facilities, which include the following:

FedEx Express closed its hub at Subic Bay on February 6, 2009, this was the first hub to be closed in FedEx's history. The hub operation was relocated to Guangzhou Baiyun International Airport in China and while ground and technical operations were transferred to Clark International Airport in Clark Freeport Zone. FedEx's support company, Corporate Air, ceased all operations after the hub closure.

The airport is also a base of a flight school Aeroflite Aviation Corp since 2006. Aeroflite utilizes the Midway ramp as its aircraft parking ramp. Training flights are conducted everyday except for holidays and as long as the VFR in Subic Bay International Airport is open. The flight school has a fleet of Cessna 150, 152, 172, Piper Seneca and Beechcraft Baron 58. Flight training in Subic Airport is done under controlled airspace where radio communications is vital.