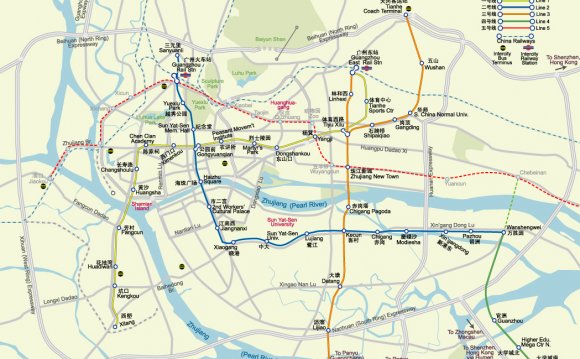 Located in the middle of south China, Guangzhou is one of the prosperous cities on the north border of the Pearl River Delta. This advantageous position makes the city a transportation hub for south China by air, road and water. This transportation system has helped the city become one of the most developed regions in south China.

Passport holders from 51 countries and regions can be granted a 72-hour visa-free permit while in transit via Baiyun Airport. Visa is not required either for passengers by international flights who pass directly through CAN with a stopover less than 24 hours. They must however have a connecting flight and a booked seat.

Airport Shuttle Bus: There are eleven shuttle bus lines supplying convenient transportation for passengers between Baiyun Airport and the downtown area; and four special lines to Foshan, Shunde, Nanhai, and Longshan. The boarding spots are located at Gate A1, A2, and A12 of International Arrival Hall; and Gate B3, B4, and B5 of Domestic Arrival Hall.

Taxi
A taxi charges CNY10 for the first 2.5 kilometers (1.6 miles), and CNY2.6 for succeeding per kilometer. It’s very convenient to shuttle between the downtown and the Baiyun Airport; However, it may cost much money. For example, it costs you about CNY100 from the airport to the City Railway Station.

To Guangzhou Railway Station
Suggestion: You can take the Airport Express Bus Line 1 at the No.7 Gate of the Arrival Hall of the Terminal Building. This line reaches CAAC Ticket Office, which is very near to the Railway Station.