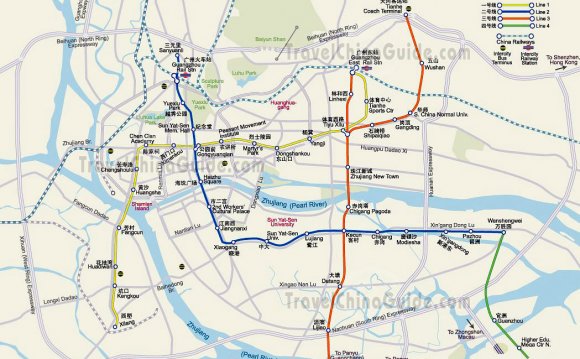 This is a map of Guangzhou subway. Now, nine subway lines have been operated, which makes urban traffic easy and convenient. The transportation hubs, such as East Railway Station, the Railway Station and the Tianhe Coach Terminal, can be reached by it.

Line 1: The Line 1 is made up of 16 stations. It is a very important vehicle to go to East Railway Station.
Line 2: There are 24 stations along the Line 2. It runs in city area from north to south via the Railway Station and South Railway Station.
Line 3: It is formed with one north-south main rail and a northeastward branch. It could reach Guangzhou Baiyuan Airport from downtown area directly.
Line 4: Starting from Chebei South in the north to Jinzhou in the south, Line 4 boasts 18 stations in total, two of which are under construction – Guanqiao and Qingsheng stations.
Line 5: The Line 5 is an artery connecting the eastern and western city and passing the Railway Station. It takes about 1 hour to run through the 24 stations.
Line 6: The Line 6, having 22 stations from east to west, interchanges with seven stations on other four subway lines and covers most of the local famous places.
Line 8: This line mainly runs on the south bank of the Pearl River, including 13 stations from west to east.
Guangzhou-Foshan Line: Running between Guangzhou City and Foshan City, the Guangfo Line has been put into use since November, 2010.
APM: Zhujiang New Town Automated Poeple Mover System (APM) is 8 kilometers(5 miles) from south to north and parallel to subway Line 3 partially.