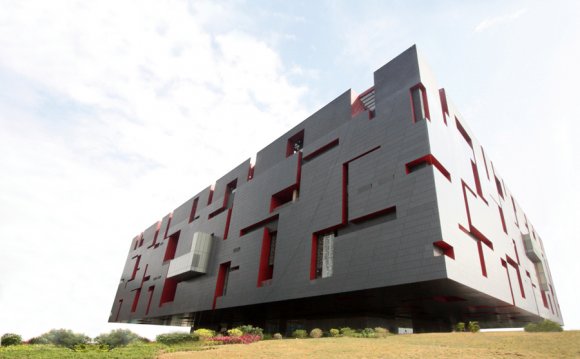 Located in the Yuexiu Park in Guangzhou City (Canton), the Museum is a comprehensive history museum with local characteristics. Established in 1929, it is a place used for collection and exhibition of historical data and cultural relics of the city. It has two major exhibition areas – the Zhenhai Tower housing the historical relics and the Art Gallery showing many exquisite local craftworks.

Zhenhai Tower
The historical exhibition is housed in a five-story building named Zhenhai Tower (Sea Guard Tower), which dates back to 1380. Zhenhai Tower is 28 meters (92 feet) high and 31 meters (102 feet) wide. It has been destroyed and rebuilt five times and was changed from a wooden structure to reinforced concrete in 1928. The reddish-brown bricks and grey tiles made the building primitively simple and unique. At the front of the building, there is a pair of two-meter-high stone lions in red sandstone made in the Ming Dynasty (1368-1644).

The tower houses nearly a thousand pictures, data and other exhibits on history of the city's history. Those collections display the changes of culture, custom and city developments. Walking into it, you can see a geographical model and a diagram of the ancient Guangzhou city at the first floor. On the second floor, there are historical relics (4000 BC - 589 AD) and unearthed remains of the Neolithic Age. When you come to the third floor, you can look around the historical relics of Sui, Tang, Song, Yuan, Ming and Qing Dynasties. The fourth floor mainly exhibits plentiful historical relics of the Qing Dynasty (1644 - 1911).

Modern Chinese cultural relics since the Opium War (1840 - 1842) are displayed on the fifth floor. Besides, there are also special showrooms at the east side of the tower where all kinds of temporary or memorable special exhibitions are often held. At the west side, there is a barbette with cannon on it and 23 ancient stone tablets.

The Art Gallery
To the east of the Zhenhai Tower lies the Art Gallery. Zhongyuan Tower, the major building of the museum, was built in 1930 and imitated the architectural style of the Hall of Literary Glory in the Forbidden City in Beijing. There are two exhibition halls – one in front of the Zhongyuan Tower and the other to the east - housing steles representing masterpieces of Chinese calligraphy from the Jin Dynasty to the Qing Dynasty.

Since the end of the Ming Dynasty, Guangzhou acted as an important port for foreign trade on the marine Silk Road. Many delicate local craftworks with features of south China became more and more popular among western countries. The Art Gallery exhibits some culture relics and handicrafts showing the Chinese and Western culture exchange at that time. On the ground floor exhibits the silk, textile and embroidery artwork, which are for long the favorites of westerners. The second floor shows porcelain and a large number of Chinese paintings of various dynasties in ancient Chinese history. The painted porcelain, lacquer work and ivory carvings are on the third floor. Apart from these precious collections, there is a Paleontology Exhibition Hall to the east of the Zhongyuan Tower, displaying the Paleozoic and Mesozoic fossils and the models of the life scenes of the ancestors of human beings in the remote past.

Besides the Zhenhai Tower and the Gallery, Guangzhou museum offers another two exhibition areas (Sanyuanli Revolution Memorial Hall and Site of Headquarters of Mar. 29 Uprising) for special interest in the city’s revolutionary history. There are also some other popular nearby spots which you can visit if you have extra time. White Cloud Mountain with great natural scenery is only 2.1 kilometers (about 1.3 miles) from the museum. About 4.9 kilometers (about 3 miles) away lies the South China Botanical Garden.